Our East Lansing High School Quiz Bowl team finished the National High School Championship Tournament tied for 5th place, our captain, Kurtis, finished the tournament ranked first in the country for most points, and we were the highest ranked team in the nation with female members.

Maybe this sort of thing happens to you all the time, but it was a first for us.

Chicago’s Wyndham O’Hare Hotel hosted the NAQT High School National Championship tournament over the Memorial Day weekend. One hundred and seventy six teams from 37 states, China, and Korea met there for a much anticipated few days of competition, camaraderie, and craziness. The way the tournament was set up, even though there were seven teams from Michigan, we did not play each other.

Our first match was against a very friendly team from Baton Rouge, LA. After our decisive victory, they asked to have a picture taken with us. They won the tournament for sportsmanship and congeniality as far as I’m concerned (both teams are pictured below). 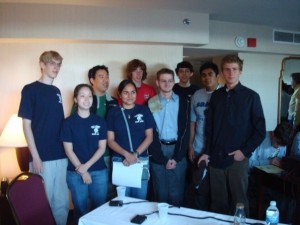 The other teams we played that first day were Rosemount (MN), Walton from Marietta (GA), North Kansas City (MO), Maggie Walker (VA), Dorman A (SC), Walt Whitman (MD), Wilmington Charter (DE), Martin Luther King High School (TN), and Walt Whitman (again). We finished that onslaught 9-1, tied for first (though in third due to point totals), and in a complete daze.

I mean, Maggie Walker won last year…and, even though the team we beat was significantly different that those National Champs, it meant something to get past them. Dorman High School was ranked as one of the best teams in the country before the tournament…and we beat them. Wilmington Charter ended the tournament in second place…and we beat them that first day. It was an other-worldly feeling, yet our team remained fairly calm and focused. Before most games, Kurtis gave a quick pep talk: usually very positive words like “We can do this”; strategic suggestions as to whether to buzz in quickly or wait for more of the question; feedback on how we had been doing with bonus convergence, etc.

One of the most memorable pictures I have in my mind is of the look on the faces of our opponents (and sometimes our own team members) when Kurtis buzzer mashed them; to be “buzzer mashed” is to be beaten by a millisecond, usually early in a question and about an answer about which you are certain. Kurtis’ ability to buzz just a little earlier than others was uncanny (all year!) and that look of disbelief from other players became almost commonplace by the end of the tournament. Of course, one needs to know the information, but having the confidence to buzz so early — and potentially risk being wrong — while being right so often, that is Kurtis’ gift.

On the other hand, my next most memorable image is of our team working together on bonus questions. Those quick discussions were oh so rich. Why I didn’t record even one match (or pep talk) is beyond me. The way Kurtis listens and decides quickly is a clinic all by itself. Priya, Liz, Danny, and Ben all giving answers with self-assurance and Kurtis hearing them all, then picking the right answer (at times not even one that was mentioned) in the nick of time.

One of the most exciting matches was against Eden Prairie. We were losing 235 to 80 at the half. Whichever team lost would have two losses, be out of the playoffs, and end up in about 10th place. As the second half began, Kurtis had that gleam in his eye. He answered the next five tossups, powering four of them. We picked up two or three bonus answers after each tossup and before anyone knew what had happened, we were winning 270 to 230. Their coach called a time out, but it was too late. We won 390 to 335. Between Kurtis’ quickness and determination and the rest of the team’s able assistance on the bonus questions, we had made our most amazing comeback victory of the tournament.

We finished with a record of 13-3 and in a tie for 5th place with Dorman A. During the two days of matches, we had beaten the teams that came in 2nd and 3rd place ahead of us. Kurtis averaged 119 points per game and still seemed humbled by the experience. Liz was flying high. Priya seemed downright joyful. Danny was amazed and happy. Ben had that glow of just soaking it all in and loving every minute. I felt honored to witness all those matches. It was one special moment after another. And time well spent. 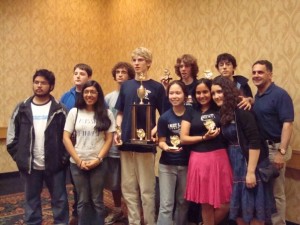 March was a fantastic month for ELHS Quiz Bowl.

A 4th place finish without Kurtis or Priya at U of M Dearborn’s Spring class! And 1st place at MSU’s March Madness Tournament! (More details on the QB website )

…but that’s not the best part.

Another memorable day in Ann Arbor. This time, though, we went 10-1 and stole the trophy away from a very good Detroit Catholic Central team (losing States for the first time in 7 years) and an excellent Grosse Pointe North team (our only loss of the day).

Our semi-final match against DCC was reminiscent of earlier matches this year (see below) in that we were down by 5 points at the half and the score was close all match.

Here are a few highlights:

• Kurtis starts off with a neg (stands for “negative 5 points” for answering a question wrong before the question has been completely read); I think he does this sort of thing on purpose to throw off the other team, but I have no proof for this. I’ve noticed it makes the other team feel at a mild advantage (“Hey, they’re starting in the hole”), thus letting him come on strong at will.
• Liz answers the following question: “A Monteggia fracture affects the proximal third of this bone and dislocates the head of an adjacent bone; that fracture often results from attempting to break a fall. This long bone gets narrower towards its (*) distal end, where the styloid process attaches to a collateral ligament of the wrist joint.
Silence….
Liz says “ulna” and it’s all good.
• Kurtis powers the following: “It was still officially known as Black Mountain…” and he says Mount “Mitchell” as if everybody should know that after eight words.
And on and on and on…

One thing that is hard to understand unless you’re there is that these questions are often read quickly and that it’s all out loud. We’re talking about some high school students who are major auditory (and maybe visual) learners. They’re all smart. Especially in certain fields. But quick. Kurtis is quick. A millisecond faster than the rest.

The Gross Pointe North game was a blur. An interesting side-note is that in both of these last two games, we began with a negative five. That says something about never being out of a match and never giving up. Earlier in the day, GPN powered eight questions to beat us and in the finals we turned the tables, not letting them get past the tossups on very many occasions. And all of a sudden we had won by over 100 points.

I could go on forever. It was a day worth remembering.

Our Varsity team had won nine matches in a row at the Rube Invitational. In each match, we had won by over 200 points with scores like 415 to 190.

In the Final match, we were up against Detroit Catholic Central. They also had not lost all day. They could still taste their close loss to us from a couple months before (see below).

At the end of the first half, DCC was winning 230 to 115. In typical grand style, we roared back. Kurtis resumed his normal, speedy, stellar form by grabbing a few tossups and the team rallied around him, answering most of the possible bonus questions. Ben showed his geography skills scoring two tossups of his own with “Guyana” and “Belgium.”

With one question to go we were somehow ahead by 20.
Then it was all a blur. A DCC member powered the question for 15 points. All they needed was one of the three bonus questions to win.

As if to prolong the inevitable, they answered incorrectly to the first and second bonuses. Then with one word, “patent,” we lost…by 5 points.

Later, I was talking with Priya. She was disappointed, but also sure we would meet them again this year and probably get them next time. Then she said, “Coach, you know it was our first loss all year.”

How could I not have realized that?

Well, our Junior Varsity team and Varsity B teams have had losses and maybe I just wasn’t paying close enough attention.
I went back and counted it up. Between CAAC, the Dearborn tournament, the White Cloud tournament, the Ann Arbor tournament, Quiz Busters matches, the Rube matches, and Tri-County so far…we have won something like 68 matches.

68-1…That rivals our Girls Basketball team that’s ranked #1 in the State.

P.S. And, today our Junior Varsity team played very well with an overall record of 5-2. The victories are nice, but it’s really a joy to watch this team play. They all answer tossup questions. They all contribute to bonus questions. They listen well to each other. It was darn encouraging. Way to go Claire, Kelsey, Andy, Ross, and William!

I’m not actually on the team. I’m the advisor, the coach.
Sometimes, though, when we win a close one, I feel like I’m on the team…just for a second.

There was that day in Ann Arbor when we beat DCC in the championship match of the tournament. We were down 80 points with a minute and a half left. It seemed out of reach.
Then Kurtis powered a question (15) and answered two bonuses in a row (20).
Priya kicks butt with a power of her own (15) and three bonuses (30)…
and all of a sudden we’re tied as the timer goes off.

In Sudden Death, there are only three questions.
Again, Kurtis pounced on the first question (15). A powerful power if there ever was one. DCC responded with a 10 point question. Then, on the last question, DCC buzzed in first, but answered incorrectly. Kurtis answered the question and we came out on top in a thriller.