I like to play with technology.  Some people worry that they’ll break whatever technology they’re using.  I’m more from the learn-from-your-mistakes camp; I also try to use as much technology as possible that has “undo” buttons and “revision histories” that magically fix my mistakes (wikis, google docs, Word, etc.).  Even though I grew up with typewriters and with room-size computers needing punch cards, I now feel comfortable experimenting with as much new technology as I can make time for.

So when my friend, Obi Wan, and all-around techie mentor, Troy Hicks, showed me his Multiplicity photo, below, I was intrigued.  I had to try it.  How do you show up several times in one photo?

{Multiplicity   n. The quality of being multiple, manifold, or various; a state of being many; a multitude; as, a multiplicity of thoughts or objects.} 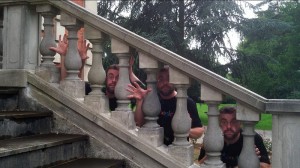 I watched a tutorial on the topic and it looked reasonably doable.  I went to the website that Troy suggested in his blog post, Pixir, and played for awhile.  I tested out various things I thought I had learned from the tutorial (which by the way, uses Photo Shop) and I wasn’t getting very far.  Then, I found a Pixir tutorial on adding layers which was a better fit for me.  Keeping the tutorial open, I went back to Pixir and played/experimented/problem solved a bit more…going back and forth from tutorial to Pixir several times.  It’s just how I learn best.  Sure, it would have been nice to have a knowledgeable person next to me to ask all my questions, but that just doesn’t happen very often in the real world.  I can’t say I’m completely pleased with my final product, but it’s pretty cool.  If you follow the link, below (for some weird reason, I couldn’t get it to load on my blog), you’ll see that I appear three times in this one photo.  You’ll also see, if you look closely, that some parts of the backgrounds are seeping through parts of my body.  You’ll have that on a first try.  But the initial affect is quite shocking and fun.

And then there’s learning about myself.  A prolific author friend of mine, Ann Nichols, suggested a website that creates personality profiles based on a person’s choices of several photos.  It’s called Visual DNA Personality Test.  I found my results to be fairly telling and accurate.  They labeled me a Seeker.  I like the connotations of the word.  My normal mode is to be curious.  Always has been.  I want to know.  I love Jeopardy, Quiz Bowl, reading just about everything, watching TED talks, traveling, taking classes, meeting people, and generally…seeking knowledge.  And I connect with like-minded people — especially students who are curious and open.  Another day of feeling like I’m in the right profession.

I try to learn something new each day; some days, what I learn helps me clarify who I am and why I’m here.  Other days, I just have fun with the process and see where it leads.

2 thoughts on “Playing and learning”